Academic IELTS Writing Task 1 question requires you to use several vocabularies to present the data given in a pie/ bar/ line/ mixed graph or to describe a process or a flow chart. Being able to use appropriate vocabularies, presenting the main trend, comparing and contrasting data and presenting the logical flow of the graph ensure a high band score in your Academic IELTS writing task 1. This vocabulary section aims to help you learn all the vocabularies, phrases and words you need to know and use in your Academic writing task 1 to achieve a higher band score. The examiner will use four criteria to score your response: task achievement, coherence and cohesion, lexical resource, and grammatical range and accuracy. Since lexical resource will determine 25% of your score in Task 1, you have to enrich your vocabulary to hit a high band score. To demonstrate that you have a great lexical resource, you need to:

It is advisable that you learn synonyms and use them accurately in your writing in order to give the impression that you can use a good range of vocabulary. 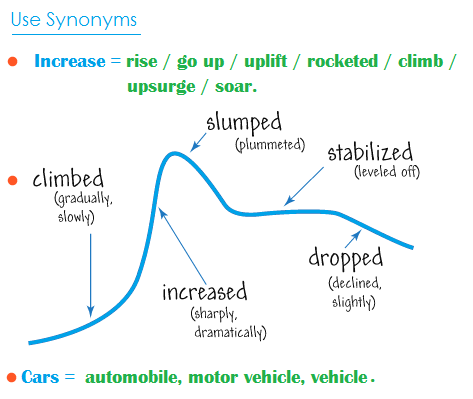 The general format for writing academic writing task 1 is as follows:

Each part has a specific format and therefore being equipped with the necessary vocabulary will help you answer the task 1 efficiently and will save a great deal of time.

Vocabulary for the Introduction

Caution:
Never copy word for word from the question. If you do do, you would be penalized. always paraphrase the introduction in your own words.

The General statement is the first sentence (or two) you write in your reporting. It should always deal with:

Example: The diagram presents information on the percentages of teachers who have expressed their views about the different problems they face when dealing with children in three Australian schools from 2001 to 2005.

A good General statement should always have these parts.

Vocabulary for the General Trend

In general, In common, Generally speaking, Overall, It is obvious, As is observed, As a general trend, As can be seen, As an overall trend, As is presented, It can be clearly seen that, At the first glance, it is clear, At the onset, it is clear that, A glance at the graphs reveals that…