You will often need to use “Adjectives” and “Adverbs” to indicate the speed of changes in the trend (called ‘Degree of Speed) in your answer. Following is a list of vocabularies that will help you present the quick changes quite effectively.

Vocabulary to describe a map

IELTS Map Example 1: The map below is of the town of Garlsdon. A new supermarket (S) is planned for the town. The map shows two possible sites for the supermarket. Summarize the information by selecting and reporting the main features, and make comparisons where relevant. 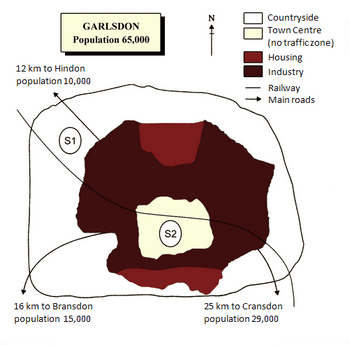 IELTS Map Example 2: The two maps below show an island, before and after the construction of some tourist facilities. Summarize the information by selecting and reporting the main features, and make comparisons where relevant. 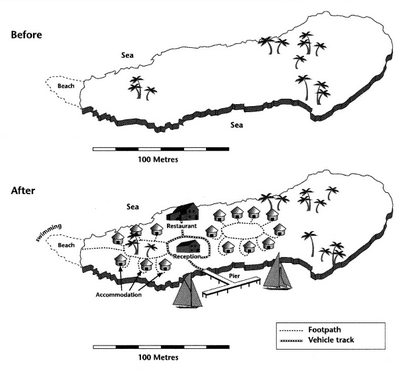 Vocabulary to describe a process diagram

In Introduction:
The diagram/ picture/ flow chart depicts/ illustrates/ describes the process of/ how….

While Describing the Process:
A) First/ Firstly, Second/ Secondly, Third/Thirdly …… Next/ After that/ Then, Following that/Followed by, Subsequently/ Subsequent to that, Finally/ Lastly…
B) Where/ From where/ After which/ After that/ Afterward…
C) When/ As soon as/ Immediately, Just after that…
D) At the beginning, In the end, Just after the beginning, Just before the end…

To denote the end of a step:
A) After this step/ stage/ process…
B) Once this stage/ step is completed…

To donate what a Step involves:
A) The phase/ step/ stage involved…

Some graphs and diagrams not only list down the data that represent something from the past or the present time but also gives a prediction of the future. For instance, a line graph might present the population of a country from 1950 to 2050, over a hundred years. If you are taking the IELTS exam in 2017, you need to describe the population of this country till 2016 using the past tense. For the population figure in 2017, you will use the present tense. Finally, the population from 2018 till 2050 is a prediction and hence you should be using the future tense while describing it in your writing. Moreover, you need to use certain vocabularies to represent such future data/ predictions. Following is a list of such vocabularies to help you accurately describe any predicted data —

However, to compare/contrast data or to show a significant change/trend you will need to show a figure that you will use as the base. For example, The British spent over eighty thousand Pounds on average which was twice than the spending of Americans and approximately quadruple than that of Irish. Here, over 80 thousand pounds is the base figure.

Vocabulary to show such figures in your report writing

Makes up: In the first decade, the population remained steady, which made up 2.8 million approximately, but it doubled in the next 30 years.

Constitutes: The initial expenditure, which constituted 280 USD, climbed rapidly and reached the peak during 2014.

Vocabulary to write the conclusion

To draw the conclusion: In conclusion / To conclude / On the whole.
To Summarize: In short / In brief / To sum up / In summary.

However, according to some teachers and examiners, a more appropriate ways of drawing the conclusion of your graph writing should start with the words/ phrases:

Tip: “In a nutshell” is not a formal expression and this is why you should not use it in your IELTS Writing.