The bar chart below shows the percentage of Australian men and women in different age groups who did regular physical activity in 2010. 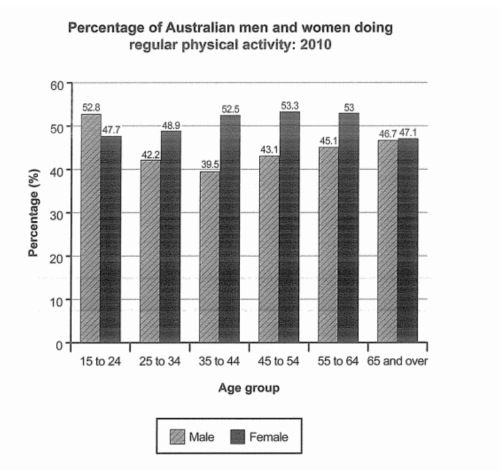 The chart compares the proportions of Australian males and females in six age categories who were physically active on a regular basis in the year 2010.

Roughly speaking, close to half of Australian adults did some kind of routine physical activity in 2010. Middle aged females were the most physically active, proportionally, while males aged 35 to 44 did the least physical activity.

Between the ages of 45 and 64, the figure for male physical activity rose to around 45%, while the proportion of active females remained around 8% higher, at 53%. Finally, the percentages of Australian women and men aged 65 and over who exercised regularly were almost identical, at approximately 47%.

(Source: Cambridge IELTS 12, NB: Follow the above writing structure for getting higher IELTS band score in the examination. This sample answer can be an example of good writing out of many possible approaches.)