The chart below compares levels of recycling, as well as some less environmentally friendly forms of waste management, in fifteen European countries. 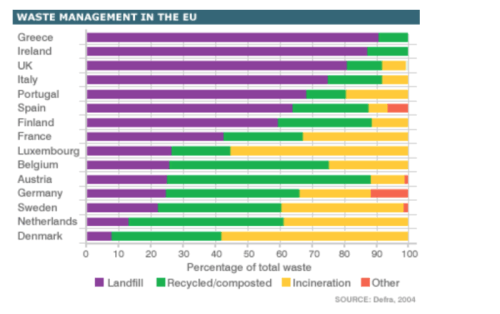 The bar chart shows the percentage of waste that is recycled, put into landfill or incinerated in various EU countries.

If we look at the fifteen EU countries as a whole, it is clear that more waste goes to landfill sites than to any other refuse management facility. In fact, while around half of the countries put the majority of their waste into landfill sites, only two countries recycle at least 50% of the waste that they produce.

Austria and Belgium are the most environmentally friendly of the fifteen countries, recycling around 60% and 50% of their waste respectively. Germany, Sweden and Belgium also appear to have effective recycling programmes, resulting in roughly 40% of waste being processed in this way in each country.

Other EU countries recycle far less. Greece, Ireland and the UK, for example, only recycle around 10% of refuse, and put between 80 and 90 per cent of their waste into landfill. Finally, while most non-recycled waste in the EU area goes to landfill, four countries, namely Luxembourg, Sweden, the Netherlands and Denmark, incinerate more waste than they bury.