IELTS is an international standardized test of English language proficiency for study, scholarships, migration, and work where English is the language of communication. It is jointly managed by the British Council, and IDP since 1989.

IELTS test is available in two formats; one is Academic Module and another is General Training Module.

1. Academic Module is intended for those who want to enroll in universities and other institutions of higher education for degree and diploma courses.

2. General Training Module is intended for those planning to undertake non-academic training or to gain work experience, or for immigration purposes.

Listening, Reading, and Writing are completed in one sitting. The Speaking test may be taken on the same day or up to seven days before or after the other tests. All test takers take the same Listening and Speaking tests, while the Reading and Writing tests differ depending on whether the test taker is taking the Academic or General Training versions of the test. 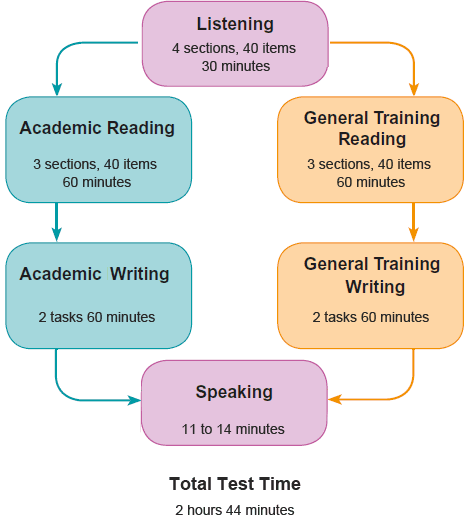 The module comprises four sections, with ten questions in each section. It takes 40 minutes: 30 – for testing, plus 10 for transferring the answers to an answer sheet.

Sections 1 and 2 are about everyday, social situations:

Sections 3 and 4 are about educational and training situations:

Each section begins with a short introduction telling the test taker about the situation and the speakers. Then they have some time to look through the questions. The questions are in the same order as the information in the recording, so the answer to the first question will be before the answer to the second question, and so on. The first three sections have a break in the middle allowing test takers to look at the remaining questions. Each section is heard only once.

At the end of the test students are given 10 minutes to transfer their answers to an answer sheet.Test takers will lose marks for incorrect spelling and grammar.

The Reading paper has three sections and texts totaling 2,150-2,750 words. There will be a variety of question types, such as multiple choice, short-answer questions, identifying information, identifying writer’s views, labeling diagrams, completing a summary using words taken from the text and matching information/headings/features in the text/sentence endings. Test takers should be careful when writing down their answers as they will lose marks for incorrect spelling and grammar.

The speaking test is a face-to-face interview between the test taker and an examiner. This interview will last for approximately 11-14 minutes.

The IELTS scoring system is very unique composed of 9 bands, measured in consistent manner and is internationally acclaimed and understood. The IELTS score ranges between 1 to 9. You should spend some time studying the IELTS band score assessment criteria for details and being more clear understanding for each part of the test.

A Test Report Form is posted to test takers 13 days after their test. The IELTS results shows:

How do I register for IELTS?

You can contact your nearest examination center for more information about registering for IELTS test and your application procedures. You may register and pay your IELTS test fee via online through British Council/ IDP Australia.