The chart below shows the proportions of adults in Canada who own one car, two cars, more than two cars, or who do not own a car. 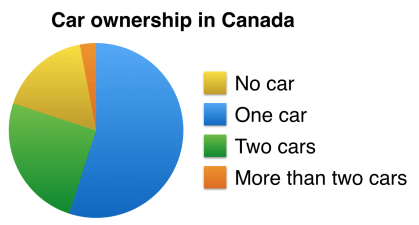 The pie chart gives information on the division of Canadian adults who own a single car, two cars, more than two cars, and those who do not have a vehicle.

Overall, it is evidently seen that majority of the Canadian adults own a single vehicle, while a small proportion of them own more than two cars.

It is interesting to note that more than fifty percent of adults in Canada own one car, while it is true that approximately 1/4 of the total Canadians, who own a car, has two motor vehicles. Moreover, there are around five percent of Canadian adults who own more than two cars, which accounts to around four times less than that of those who do not own a vehicle.

Furthermore, those Canadians, who do not have a car has a proportion of approximately 20 percent of the total pie chart.