The chart below shows numbers of incidents and injuries per 100 million passenger miles traveled (PMT) by transportation type in 2002. 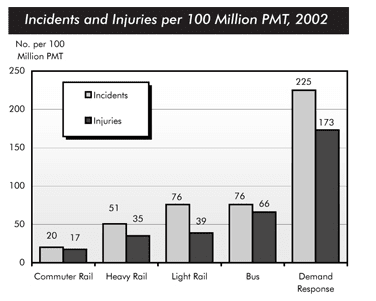 The bar chart compares the number of incidents and injuries for every 100 million passenger miles traveled on five different types of public transport in 2002.

It is clear that the most incidents and injuries took place on demand-response vehicles. By contrast, commuter rail services recorded by far the lowest figures.

A total of 225 incidents and 173 injuries, per 100 million passenger miles traveled, took place on demand-response transport services. These figures were nearly three times as high as those for the second highest category, bus services. There were 76 incidents and 66 people were injured on buses.

Rail services experienced fewer problems. The number of incidents on light rail trains equaled the figure recorded for buses, but there were significantly fewer injuries, at only 39. Heavy rail services saw lower numbers of such events than light rail services, but commuter rail passengers were even less likely to experience problems. In fact, only 20 incidents and 17 injuries occurred on commuter trains.