The chart below shows figures for attendances at hospital emergency care departments in Northern Ireland by age group in December 2016 and December 2017. 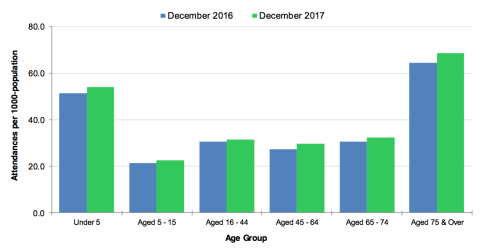 The bar chart compares the number of visits made by people in six age categories to hospital emergency wards in Northern Ireland in the December of 2016 and 2017.

It is clear that elderly people and the youngest children were the most frequent visitors to A&E (accident and emergency) departments. Also, there was a slight increase in the rate of emergency care attendances among all six age groups from December 2016 to December 2017.

At the other end of the age scale, the figures for A & E visits by under-5s rose marginally from around 50 to approximately 52 per 1000-population over the one-year period. Children aged 5 to 15 made the fewest visits, at just over 20 per 1000-population in both months. Finally, there was almost no difference in the figures for emergency care attendances among people aged 16 to 44, 45 to 64 and 65 to 74.

IELTS Reading – The Department of Ethnography